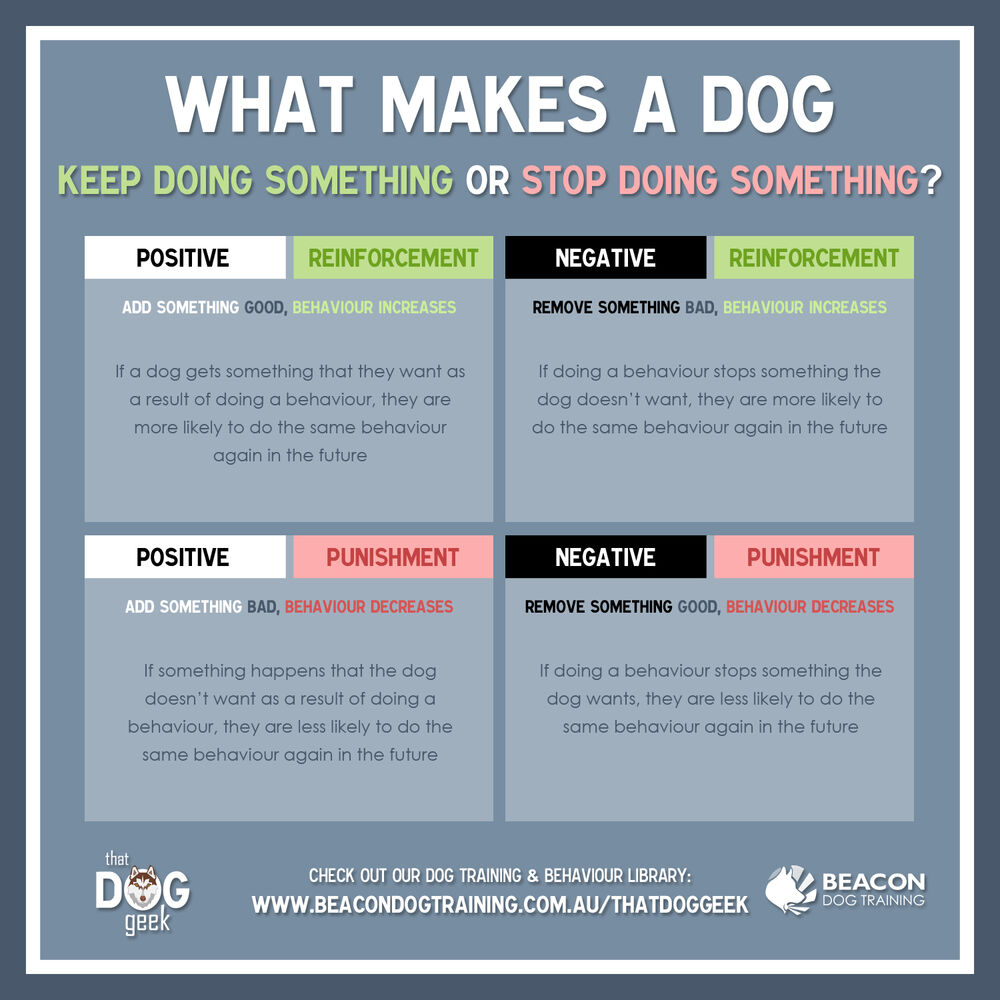 Ever wondered “why does my dog jump on guests” or “why doesn’t my dog come when called”?

If you boil scientific dog training down to it’s simplest elements, there are four scenarios that determine which behaviours your dog will keep doing, and which behaviours they’ll stop. These are known as the four quadrants of operant conditioning, and this is where you can find most of the answers as to WHY your dog does the things they do!

2. Your dog does a behaviour

The behaviour will increase or decrease depending on whether the consequence is something your dog wants / likes or something they don’t want / dislike.

Here’s our first question “why does my dog jump on guests” broken down:

2. The dog jumps on the guest

3. The dog receives attention and maybe pats from the guest

This scenario is an example of POSITIVE REINFORCEMENT – the dog got something they wanted (attention) as a result of jumping, so they are more likely to jump in a similar situation in the future.

Here’s a scenario that could be the answer to our second question, “why doesn’t my dog come when called”:

1. The dog is having fun running down the street when the owner calls them back

2. The dog returns to the owner

3. The dog is shut back inside the house

This is NEGATIVE PUNISHMENT – something the dog wanted / was enjoying (freedom) stopped as a result of coming when called, so the dog is less likely to come when called in a similar situation in the future.

A common example of NEGATIVE REINFORCEMENT is when fearful dogs learn to react and bark at other dogs:

2. The dog growls, barks and lunges

Because the barking behaviour caused the thing that the dog didn’t want (the approach of the other dog) to stop, the dog is more likely to growl, bark and lunge in a similar situation in the future.

Lastly, an example of POSITIVE PUNISHMENT is if a dog were to avoid getting in a car due to a bad experience:

1. Owner opens car door and asks dog to jump up

2. Dog jumps into car and steps on a hot seat belt buckle that’s been in the sun

3. Dog’s paw is burnt by the buckle

As something the dog didn’t like happened as a result of entering the car, the dog is less likely to get in the car in the future.

A scientific trainer will train dogs by manipulating the consequences of the dog’s behaviour so that desirable behaviours are more likely to happen, or undesirable behaviours are less likely to happen. The most efficient and ethical way to train is by primarily making use of the positive reinforcement quadrant, which is why many modern trainers refer to themselves as “positive reinforcement trainers.”

DISCLAIMER: This is a pretty technical concept that we’ve attempted to break down so that it’s understandable to someone without experience in behavioural science. We’ve made some generalisations and left out some particulars on purpose to keep things as simple as possible. If you’d like to learn more about operant conditioning and behavioural science, two of our favourite books on the topic are “Don’t Shoot The Dog” by Karen Pryor and “How Dogs Learn” by Mary R. Burch and Jon S. Bailey.